Nepal: UN Experts sound the alarm on violations of indigenous peoples’ rights and call for respect of the right to Free, Prior and Informed Consent (FPIC) in the development of Marsyangdi Corridor Transmission Line Project 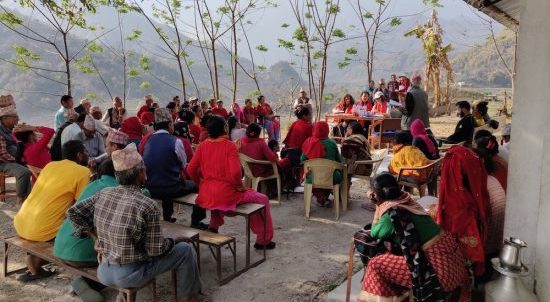 Bangkok, 20 September 2022: UN human rights experts expressed serious concerns about the Government of Nepal and local police threatening, intimidating, and criminalizing indigenous communities and members of FPIC and Rights Forum in Lamjung District, Nepal. The experts called for the Nepal Government to obtain Free, Prior and Informed Consent from indigenous communities who are affected by the Marsyangdi Corridor Transmission Line project through meaningful and inclusive participation measures.

On 24 May 2022, UN human rights experts sent letters to the Nepal Government, the state-owned Nepal Electricity Authority, and the European Investment Bank (EIB), the key financier for the project, stating that they are disturbed by the Nepal government’s “lack of good faith consultations with the affected indigenous communities” and by “the failure to obtain Free, Prior, and Informed Consent of the affected Indigenous Peoples” whose land and livelihoods would be affected by irreversible social and environmental damage caused by the Marsyangdi Corridor Transmission Line project.

In the letters, the UN experts reminded the Nepal Government of its human rights obligations under international instruments to which it voluntarily agreed to be bound which include obligations to uphold the rights of indigenous peoples, in particular, to obtaining the Free, Prior and Informed Consent of Indigenous Peoples prior to the approval of any project affecting the use and development of their traditional lands and resources.

The experts are concerned about the allegations that multiple armed police officers were deployed at the village to install transmission wires and the women who were peacefully protesting were beaten with sticks while others were arrested and threatened with further retaliation if they didn’t stop their protest. The experts highlighted that the presence of armed police officers while implementing the project is “not only restricting their peaceful and legitimate work in defending their human rights, but also resulting in a chilling effect on other groups and individuals also engaged in doing so.” The experts warned that the Nepal Government “is failing to meet its international human rights obligations to protect the human rights of Indigenous Peoples and communities against abuses by business enterprises operating in its territory and/or under its jurisdiction.”

Khemjang Gurung, the chairperson of the FPIC and Rights Forum welcomed the letter from the UN experts and said that “this letter resonated our social and environmental concerns which have not been effectively addressed and reflected the challenges on the ground for community leaders and Indigenous Peoples rights defenders who engaged in peaceful activism in defending  our homes and our families.  We urge the authorities and the European Investment Bank to open a dialogue and partner with us and  indigenous communities in finding peaceful solutions and justice.”

Advocate Durga Mani Rai of Lawyers Association for the Human Rights of Nepalese Indigenous Peoples (LAHURNIP) responded to the UN experts’ statement that “the Nepal Government and other concerned stakeholders are failing to protect and respect the rights of Indigenous Peoples to FPIC on their land territories and resources including self-determined development as enshrined in the International Labour Organization Convention No.169 and the UN Declaration on the Rights of Indigenous Peoples, both of which the government endorsed. This failure is why the project only leads to conflict. The affected communities are not against the development but want their rights to be respected.The key stakeholders including the Nepal Government and the European Investment Bank cannot shy away from their duties to fulfill international human rights obligations for Indigenous Peoples.”

In a letter addressing the European Investment Bank, the UN human rights experts also expressed deep concerns for “the involvement of the European Investment Bank in the negative human rights impacts on indigenous community members of the FPIC and Rights Forum, resulting in threats and acts of intimidation of Indigenous Peoples.” The experts reiterated their concerns “about the lack of adequate due diligence measures in place to mitigate and remedy adverse human rights impacts of the financing activities of the European Investment Bank.” The experts invited the EIB to present information on whether the Free Prior and Informed Consent of affected indigenous communities was sought, prior to the approval of the Marsyangdi Corridor Transmission Line project and provided steps taken to ensure that affected communities “have access to effective, adequate, and timely remedies and compensation for development and business-related human rights abuses.”

At the time of writing, none of the three stakeholders to which the letters are addressed have provided a written reply that is available to the public.

In 2018, the FPIC and Rights Forum, a grassroots network of affected local and Indigenous Peoples representatives submitted a complaint to the EIB Complaints Mechanism (EIB-CM), an accountability mechanism tied to the EIB. The complaint triggered a compliance review process to investigate whether the EIB has fulfilled its duties and responsibility under the EIB’s environmental and social safeguards and financial contract. The Conclusions Report following the investigation identified several areas of EIB’s non-compliance with EIB environmental and social standards including significant gaps in environmental and social due-diligence, inadequate public consultation and project information disclosure, failure to obtain Free, Prior, and Informed Consent from indigenous peoples, and failure to provide special protections for involuntary resettlements and land acquisition.

Sutharee Wannasiri of the Accountability Counsel, an advisor to communities affected by the Marsyangdi Corridor Transmission Line Project, reflected that that “the European Investment Bank has a duty to comply with the EIB’s own environmental and social safeguards as well as to address non-compliance areas and implement recommendations from the Conclusions Report. Effectively remediating the harms that the project has caused to affected local communities and Indigenous Peoples should be the priority for the EIB and the Nepal Government moving forward.”

The unofficial translation of the UN human rights experts’ letter to the Nepal Government is available in Nepali.