The European Investment Bank must walk the talk and uphold its zero-tolerance policy on reprisals against communities in Lamjung District, Nepal 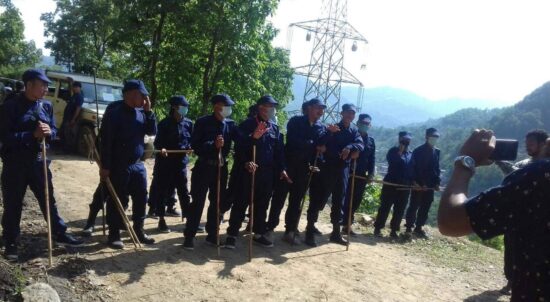 KATHMANDU, 17 May 2022 – Members of FPIC and Rights Forum, a network of Indigenous and local communities who have been affected by the development of the 220kV Marsyangdi Corridor Transmission Line Project in Lamjung District, Nepal, demand that the European Investment Bank stop turning a blind eye to human rights violations associated with the project and follow through with its commitments on protection and sustainable development.

For years, community members impacted by the transmission line have told the project implementer, the Nepal Electricity Authority (NEA), and the investor, the European Investment Bank (EIB), that the 220kV Marsyangdi Corridor Transmission Line Project violates their human rights and environment. Instead of responding to and addressing their concerns, the NEA has retaliated against the communities, and the EIB has failed to adequately respond.

In 2018, community members filed a complaint to the EIB’s accountability office, the Complaints Mechanism (EIB-CM) alleging adverse impacts on their environment and livelihoods. The EIB-CM investigated and concluded in April 2021 that the project violated the EIB’s own social and environmental safeguards – including insufficient information disclosure, inadequate public consultation with affected communities, and an absence of evidence to obtain free, prior, and informed consent from Indigenous communities – and recommended the EIB and NEA address that non-compliance.

In April 2022, one year after the investigation report was released, instead of demonstrating corrective actions, the NEA resumed the construction of the transmission line with the use of security forces and violent suppression. During the last week of April and the first week of May 2022, FPIC & Rights Forum reported multiple incidents of intimidation, physical assaults, and the arrest of community members in Wards No. 1 and No. 2 of Dordi Rural Municipality in Lamjung District.

On 27 April 2022, NEA officials, accompanied by approximately 30 police officers, installed the wire to a transmission tower on the land of Ms. Pabitra Thapa, a single mother of four children, without her consent. When Pabitra and other community members peacefully protested NEA official’s actions on her land, she was brutally beaten by police and sustained injuries on her legs.

On 1 May 2022, while the community continued to protest the NEA construction work, police arrested four community members including Pabitra Thapa. She was brutally beaten again when loaded in a police vehicle. The youngest person arrested, Pabitra’s son, is only 17 years old. Police alleged that the four community members were obstructing the construction of the transmission line. While in police custody, the four individuals were coerced into signing a document promising to stop protesting the transmission line, or face charges and a longer detention.

“Instead of upholding our rights and fixing their mistakes, the NEA is not hesitant to use violence and security force to push through the construction of the transmission line and deepening the oppression of our voices,” said Chandra Bahadur Mishra, Secretary of FPIC & Rights Forum. “The acts of intimidation, threatening, harassment, and detention of the affected communities in order to implement this project must be stopped immediately.”

This is not the first incident of reprisals that was reported to the EIB and the EIB-CM. In December 2021, NEA officials, accompanied by a dozen armed police officers, visited a community in Bajhakhet village and threatened to mobilize the police against them if the community did not stop voicing its opposition to the project. Four months after this incident was reported, the EIB has not shared the result of its investigation into this reprisal. Meanwhile, the violence on the ground has escalated. Advisors to the communities, Lawyers’ Association for the Human Rights of Nepalese Indigenous Peoples (LAHURNIP) and Accountability Counsel, have also repeatedly advised the EIB and EIB-CM on NEA’s past pattern of human rights abuses, which is playing out again in eerily similar fashion.

“The EIB’s silence and inaction to swiftly investigate the reprisals against community members are being interpreted as an endorsement of the NEA’s use of security forces on the ground to force the development project on affected communities against their will,” said Durga Yamphu of LAHURNIP.

The EIB-CM’s policy prohibits acts of retaliation against people who file complaints, and the EIB-CM published an updated policy document in April 2022 reiterating its commitment to “taking steps to prevent and address potential risks of reprisals against complainants.​​”

“When an EIB-financed project contributes to human rights abuses, the Bank has a responsibility to address the harm and provide access to remedy. Failure to respond to incidents of retaliation, as we witness in this case, only escalates the attacks on communities and perpetuates discrimination against marginalized populations,” said Sutharee Wannasiri of Accountability Counsel.

FPIC and Rights Forum, LAHURNIP, and Accountability Counsel urge the EIB to listen to the voices and concerns of affected peoples and take the lead to address the abuses. If the EIB cannot ensure the safety of people who avail themselves of its complaints mechanism and cannot ensure its own policies are adhered to, it calls into question its claim to be a responsible investor. It also sends a dangerous signal to project implementers that they need not heed the environmental and social obligations they commit to when receiving financing from the EIB. And community members – whose human rights and environment are at stake – suffer the consequences.

See the additional press statement from affected community members in English and Nepali.