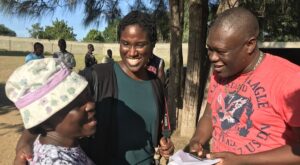 Advocates from Accountability Counsel, ActionAid Haiti, and the Kolektif celebrate the signing of
the agreement together in December 2018.

In 2018, we shared groundbreaking news that communities we support in Haiti had reached an historic agreement to remedy harm. After three years of implementation, we are sharing an update tracking both the significant gains and the challenges still to be overcome to ensure that the agreement on paper leads to meaningful changes for the families who were harmed.

Ten years ago, hundreds of Haitian farmers and their families lost their livelihoods overnight after being forcibly displaced from their land to build a large industrial park in northeast Haiti. In 2017, we supported these farmers, collectively known as the Kolektif Peyizan Viktim Tè Chabè, to file a complaint to the Inter-American Development Bank (IDB), leading to an agreement with the IDB and the Haitian government to restore the livelihoods of those displaced families.

Implementation of that agreement has been slow and uneven, with significant steps taken mostly in the last year, including the long-awaited transfer of replacement land to 13 of the most vulnerable families. As both food insecurity and physical insecurity continue to rise in Haiti, the community is demanding that the IDB and the Haitian government act urgently to deliver land to 87 of the most vulnerable families and to deliver properly functioning irrigation equipment to the remaining 40 families.

In the video below, one farmer explains that the well he was provided does not reach a sufficient depth. He also explains that he was asked to sign a document confirming that his well was completed and operating to his satisfaction, but he did not understand the purpose of the document or agree with that assessment of his well.

Delays in the process have led to hunger in the community, with people eating fewer and lower quality meals. The lucky ones who have received the benefits of the agreement have expressed having greater resilience and greater hope for the future.

As the IDB commits to an additional $65 million investment in the Park, all eyes will be on the Haitian government and IDB to see if they will hold to their promise to resolve these issues before more money is disbursed to a project that has not yet met its minimum obligations to prevent and mitigate harm to communities.

“If I have the ability to irrigate the land, I will have hope that my life will change.” – A farmer who received irrigation equipment

Throughout the complaint process, the Kolektif had the support of Accountability Counsel, a global, non-profit organization that specializes in supporting community-led dispute resolution; ActionAid Haiti, the local affiliate of ActionAid, a global movement of people working together to further human rights and defeat poverty; and the strong local leadership of Action pour la Reforestation et la Défense de l’Environnement (AREDE), a Northeast Haitian organization working to protect the environment, and fighting social exclusion, poverty, and land grabs.