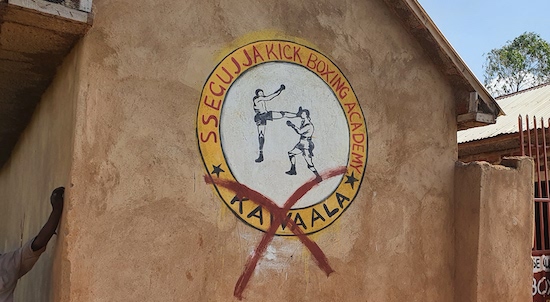 KAMPALA, JULY 8, 2021 – Community members in Kawaala Zone II in Kampala, Uganda have filed a complaint to the World Bank’s Inspection Panel following attempts to evict them from their homes and farmland without adequate compensation to make way for the Lubigi drainage channel expansion. [1] Their complaint comes alongside a new COVID-19 lockdown in Kampala, leaving residents even more vulnerable to the impacts of eviction.

The complaint demands a fair and comprehensive resettlement process, following events last December when excavators accompanied by armed guards began to evict residents, destroying homes and crops in the process. One day before that, the Kampala Capital City Authority (KCCA) had distributed eviction notices throughout the area, requiring residents to vacate their land within 28 days. The complaint alleges that residents were not consulted or provided compensation before evictions began, despite their recognized Kibanja land holding rights.

The area is being cleared to make way for the planned Lubigi drainage channel, a project being constructed by the KCCA with support from the World Bank. [2] The drainage channel is part of a broader road and infrastructure project, the Kampala Institutional and Infrastructure Development Project, which has been carried out in two phases. This project first impacted Kawaala Zone II around 2010, when a channel diversion was constructed. The current planned expansion will widen that channel and require forced evictions across an area at least 70 meters wide and 2.5 km long.

The complaint alleges impacts from the 2010 channel diversion including increased flooding and a lack of safe walkways or bridges, which has led to at least one death. It also lists feared impacts from the planned expansion, including worsening flooding issues, loss of family grave sites, and loss of homes and farmland, the income from which is used to pay children’s school fees.

Jeff Wokulira Ssebaggala, Country Director of Witness Radio said, “Since last December, the KCCA has pushed residents through a rushed and problematic resettlement process, pressured them to sign documents in English that they do not understand and used threats and other coercive tactics to convince them to relinquish their land rights. With the COVID-19 pandemic currently ravaging Uganda, residents are even more vulnerable to the impacts of forced displacement, yet the project and the forced displacement process have continued.”

Robi Chacha Mosenda of Accountability Counsel explained, “Since the project is receiving funding from the World Bank, it is subject to the Bank’s commitments to provide fair compensation and resettlement assistance prior to evicting anyone for a project it finances. As these commitments have not been upheld, Kawaala community members are turning to the World Bank’s independent accountability office, the Inspection Panel, to demand the right to resettle themselves with dignity.” The complaint includes demands that the World Bank respect community members’ rights to meaningful consultation, compensation, and safe resettlement.

[2] More information about the World Bank’s support for KIIDP-2, which includes the Lubigi drainage channel, is available here.