In Deep Water: Will the World Bank honor its commitments to the poor in an Indian water project? 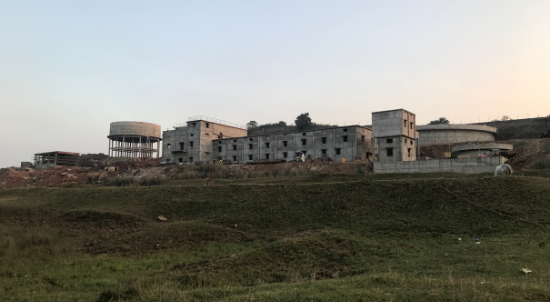 In the wake of a scandal revealing the World Bank may have suppressed knowledge of money for the poor being siphoned off by elites, all eyes are on the Bank to see whether its commitments to the poor hold water. Now, the Bank has a chance to demonstrate its commitment to vulnerable communities––and not the wealthy few––by righting its wrongs in a massive water scheme the Bank is financing in rural India.

As Adivasi (Indigenous) women of Giddhijhopri village near the city of Jamshedpur in Jharkhand were tending to household chores in July 2016, their daily routines were disrupted by the arrival of police officers and workers with heavy machinery. Shocked by the workers who started clearing land in their village, the women protested, but were beaten by the police with lathis (bamboo canes) and later charged with criminal cases for protesting. Less than 10 kilometers away, communities in Sarjamda Purana Basti village were similarly blindsided as their village turned into a construction site overnight. 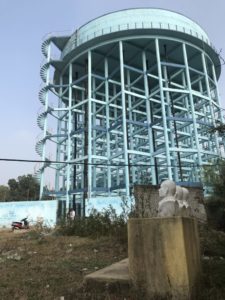 Construction for the water scheme is taking place on the customary land
of Adivasi communities. In Sarjamda Purana Basti, statues of martyrs were
inappropriately erected without the communities’ consent.

The construction in these two villages in Jharkhand was part of the “Rural Water Supply and Sanitation Project for Low Income States,” a US$1 billion project financed by the World Bank (US $500 million) and the Government of India. This massive water scheme is meant to increase access to piped water and sanitation for rural communities in four of the poorest Indian states: Assam, Bihar, Jharkhand, and Uttar Pradesh. However, the experience of Santhal and Ho Adivasi villagers in Giddhijhopri and Sarjamda Purana Basti makes clear that the rights of the very communities the Bank purports to serve are being trampled on in its design and construction.

In both villages, construction for the water scheme is taking place on lands of deep cultural significance. In Giddhijhopri, a water treatment plant is being built at the Jaher Sthal, a hilltop where Santhal Adivasi villagers have for generations buried and cremated their dead, worshipped at a sacred grove, accessed medicinal plants, and used as pastureland for goats. Meanwhile, in Sarjamda Purana Basti, a water storage tower was built over the Shaheed Sthal, the memorial site of three martyrs who lost their lives in the agitation for an independent state of Jharkhand and where community prayers are held. To add insult to injury, after razing the original martyrdom site, officials placed statues of the martyrs adjacent to the construction site as a mitigatory step without consulting the communities, who do not believe in erecting statues.

To make matters worse, the project risks undermining existing water access and further impoverishing Adivasi communities in Jharkhand, many of whom already live below the poverty line. Until now, water has been available free of charge as the communities rely on local water resources, including ponds, wells, and hand-pumps. The communities worry the water sources they have conserved for generations will be polluted and depleted as a result of the project. They fear that they will have to pay for access to water after implementation of the project.

With their sacred spaces trampled on and water resources threatened, both communities submitted complaints in 2018 to the World Bank’s independent accountability office, known as the Inspection Panel, arguing that the project structures were forced on them in violation of the Bank’s own safeguard policies. The Bank’s policy on Indigenous Peoples demands a process of “free, prior and informed consultation,” yet the communities had not received information about the project and were not consulted before construction began in their villages.

The communities argue the project not only violates World Bank policies, but also Indian law. As Indigenous-majority areas, the two villages enjoy special Indigenous self-governance protections under the Constitution of India requiring that any decision regarding common community resources be taken by a Gram Sabha, a general assembly of all the adults of a village. In this case, the communities have documented that valid Gram Sabha consent was not obtained. The communities have also documented that the water project appears to be part of a larger plan to expand the boundaries of Jamshedpur city, which would jeopardize these special legal protections afforded to the community as a rural Adivasi village. In other parts of Jharkhand, municipal limits have been expanded into rural areas to nullify these protections. 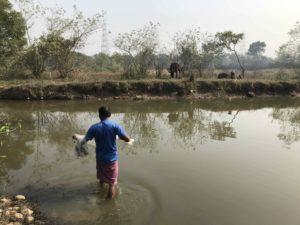 World Bank-funded water schemes risk damaging the current water sources
of Adivasi communities due to the wastewater they will generate.

In formulating an action plan, communities hope the Bank will conduct a free, prior and informed consultation, which is required under Bank policy but has been lacking from the outset. The process for consultation requires careful thought and should be tailored to the specific circumstances to ensure these communities have the ability to genuinely contribute to the action plan. Communities are counting on the Bank to be transparent and allow their advisors to participate.

For villagers in Giddhijhopri and Sarjamda Purana Basti, these steps to address the water scheme’s harmful impacts are long overdue, and are the minimum required of the World Bank to demonstrate a meaningful commitment to the vulnerable communities the project is meant to serve. We at Accountability Counsel are humbled to support these communities in their efforts to protect their rights and hold the World Bank accountable to its mission. To learn more, read our case page: India: Jharkhand Water Project.