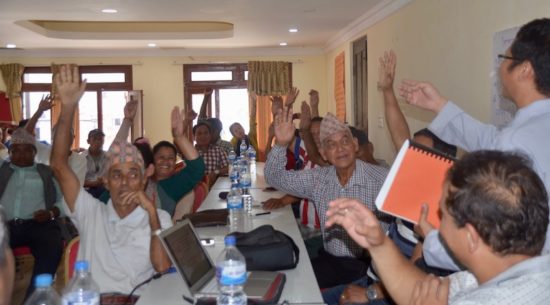 Local communities in Lamjung district of Nepal have organized together as the “FPIC & Rights Forum”, demanding that hydropower sector projects in their region follow free, prior, and informed consent (FPIC), and respect Indigenous Peoples’ and other local communities’ rights. “Affected communities have not been consulted on the project even though it will pass through our forests, homes, and lands. We have filed a complaint because we want the Complaints Mechanism to mediate a solution between affected communities, and the authorities, project promoters, and financiers,” said Khem Jung, the Chairperson of the FPIC & Rights Forum, and a local Gurung (Indigenous) leader.

On August 9, 2018, advocates for the FPIC & Rights Forum had written a letter to the EIB about the affected communities’ concerns. The EIB has not yet provided a substantive response to communities’ concerns. Since the project is moving ahead regardless, communities are concerned their rights will be violated. As a result, the FPIC & Rights Forum have now raised their issues by filing a complaint to the “Complaints Mechanism”, which is a part of the European Union’s accountability framework for the bank.

Advocate Shankar Limbu, Secretary of the Kathmandu-based Lawyers’ Association for Human Rights of Nepalese Indigenous Peoples (LAHURNIP), which is providing legal support to the affected communities, said: “Many affected communities are concerned about health and safety impacts of the project. Transmission lines can impact ecological resources, cultural practices, and traditional livelihoods of Indigenous Peoples and others who may depend on the land. The Lamjung communities are concerned about the project’s environmental impacts, including trees being cut, and birds (like owls and hawks) disappearing. They have seen these negative impacts firsthand as other transmission and distribution line projects have come up in the region recently.”

Mr. Chandra Misra, Secretary of the FPIC & Rights Forum said: “The project is not following the EIB’s environmental and social standards, international law, and domestic law. There has been no information disclosure, no consultation. These gaps must be remedied through our participation.” The complaint describes how the European Union’s project is violating the United Nations Declaration on the Rights of Indigenous Peoples, International Labour Organization Convention No. 169, and fundamental rights guaranteed under the Nepali Constitution.

Ms. Kamala Basaula, said: “The 220 kV Marsyangdi Corridor is going to pass directly over my house, and I know it is not safe to stay in the house once the line is up. I cannot say if the project is good or bad… I have very conflicted emotions because all our savings are invested in the house… Our children are growing, their education needs are also increasing. How will we take care of that, if the house will be torn? We don’t know what compensation will be. And don’t know if the compensation will be adequate or not, because prices are rising, and I am wondering if we will be able to resettle elsewhere.”

Mr. Siddharth Akali, South Asia Consultant with Accountability Counsel, an international legal organization that is supporting communities, said, “In addition to cases of physical displacement, there is likely to be significant economic displacement of affected people. Below transmission lines, landowners cannot build any infrastructure or plant trees, and typically banks do not accept the property as collateral for loans. This leads to a drop in the value of the land on which the transmission line project acquires an easement. Adjacent lands also face devaluation. The EIB’s rules regarding economic displacement require the promoter to address Lamjung communities’ concerns and make them whole for any harms.”

Ms. Binu Tamang, whose house is also expected to come under the line said, “The project should not be a win-lose situation. It should be a win-win situation. I understand the government is also wanting to do good work, and we are not trying to prevent the good work. But government should also understand that developing these projects should not make its people suffer. Compensation is important but it is not everything. Government should be concerned about safety and security of people when such projects come, and make sure affected people are informed about the same.”