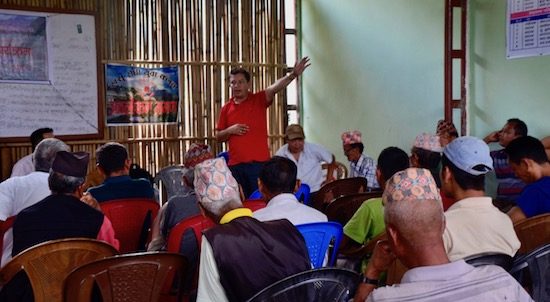 LAMJUNG DISTRICT, NEPAL – On August 9, 2018, International Day of the World’s Indigenous Peoples, Indigenous communities in Lamjung district, Nepal are demanding that the 220 kV Marsyangdi Corridor transmission line project respect their rights and seek their Free, Prior, and Informed Consent (FPIC). The communities, through the FPIC & Rights Forum, and supporting organizations, have sent a letter to the European Investment Bank (EIB), which is funding the project.

“The FPIC & Rights Forum is an umbrella organization for local-level Struggle Committees of peoples affected by various hydropower sector projects in Lamjung district,” explains Mr. Chandra Misra, the Secretary of the FPIC & Rights Forum. “These projects include projects such as Nyadi and Dordi hydropower projects, and the 220 kV Marsyangdi Corridor and 132 kV Bhulbhule Mid-Marsyangdi high voltage transmission lines.”

The 220 kV Marsyangdi Corridor is a high voltage transmission line meant to connect a total planned capacity of more than 1,000 MW of hydrogeneration projects in the Marsyangdi and related river systems, to Kathmandu and India. The Marsyangdi Corridor starts in Manang district near the base of the Annapurna. It passes through the Annapurna Conservation area into Khudi in Lamjung district and goes through Udipur before heading towards Markichowk in Tanahu district, and then Bharatpur in Chitwan district. The planned route of the line passes over forests, community resources, homes, structures and private lands.

Below transmission lines, landowners cannot build any infrastructure or plant trees, and banks do not accept the property as collateral for loans. This leads to a drop-in value of the land on which the transmission line project acquires an easement. Many affected communities are also concerned about health safety and environmental impacts of the project. Communities across Nepal who are affected by transmission lines have expressed concerns that the current practice of providing only 10% compensation for the narrow strip of land under the transmission line is too low.

“The people of Lamjung have had poor experiences with other projects in the region,” explained Mr. Khem Jung, the Chairperson of the FPIC & Rights Forum, and a local Gurung leader. “We are calling on the EIB to ensure a rights-based community decision making process, wherein communities are provided information and consultation about this project, and receive fair community-level and individual-level compensation for any impacts they will suffer.”

“Free prior informed consent or FPIC is an international legal standard that requires projects and authorities to seek permission from local Indigenous Peoples before taking action on their lands,” said Advocate Shankar Limbu, Secretary of the the Kathmandu-based Lawyers’ Association for Human Rights of Nepalese Indigenous Peoples (LAHURNIP), which is an organization supporting communities. “FPIC means that communities have the final say in decisions that affect them. But in Lamjung, communities have not been provided basic information or opportunities for consultation on project impacts. These are core building blocks of FPIC, which are missing.”

Deficiencies in the EIB’s environmental and social due diligence

The communities’ letter to the EIB encloses a report by an independent scientist from the U.S. office of the Environmental Law Alliance Worldwide (ELAW), who reviewed an initial environmental examination (IEE) conducted for a portion of the Marsyangdi Corridor, and found it to be deficient on many fronts.

“The EIB has decided that the IEE satisfies its requirements, but an independent scientist has found glaring errors in it,” states Mr. Siddharth Akali, South Asia Consultant at Accountability Counsel, a U.S. based organization supporting the communities. “The Marsyangdi Corridor is supposed to be in Western Nepal near the Annapurna base camp. But when we mapped the coordinates given in the IEE it put the line mostly in China with part of it in Eastern Nepal near Mount Everest. These gaps call into question the broader design, planning and implementation of the project.”

“We want the EIB to remedy shortcomings in the IEE and ensure communities are given adequate information about the project’s environmental, social, and economic impacts,” said Mr. Chandra Misra, who is reportedly affected by the 220 kV Marsyangdi Corridor and another project. “Impacts for the project must not be evaluated in an isolated manner. Cumulative impacts from other existing and planned projects in Lamjung and the surrounding region must also be considered.”

“The IEE acknowledges that the majority of people in Lamjung are Gurung, but we have not been provided information in our Gurung language,” said Mr. Prithviman Ghale, traditional head of the Khasur Gurung village. “Many of us have not even been told whether we will be impacted even though maps from the project office say we will be.” Khasur is a traditional Gurung village in Lamjung district and its traditional forest and cultivation lands are expected to be impacted by the 220kV Marsyangdi Corridor.

The Lamjung communities’ demands are bolstered by a recent landmark decision by the Nepal Supreme Court, in which the Court confirmed the importance of consultation with locally affected peoples as part of a larger framework of rights-based development. In that case, forty-seven local people filed a case against the Nepal government’s decision to expand the Tribhuvan Highway without paying compensation to affected parties.

“In the Kathmandu Roads Expansion case, the Supreme Court reiterated that the government has to balance infrastructure development with civil rights, and avoid adverse impacts on the environment and sites of archeological importance,” said Advocate Rajesh Sotang from LAHURNIP. “The 220 kV Marsyangdi Corridor is, similarly, a linear infrastructure project where there has been a failure to ensure adequate compensation despite the project’s significant impacts to private land and a failure to give due consideration to environmental impacts.”

Mr. Siddharth Akali, South Asia Consultant with Accountability Counsel, said: “The EIB should ensure information disclosure and consultation is done with a view to seek consent for the project, including by improving project design and implementation to respond to the communities’ concerns. This is crucial to ensure rights to FPIC are upheld, as required under the EIB’s standards, and international and domestic law.”

Mr. Chandra Misra from the FPIC and Rights Forum stated: “The FPIC & Rights Forum hopes the EIB can play a leadership role in raising the standards of project implementation in the district by implementing the 220kV Marsyangdi Corridor in a rights-respecting manner.”