There’s Only One Side: Stand for Human Dignity 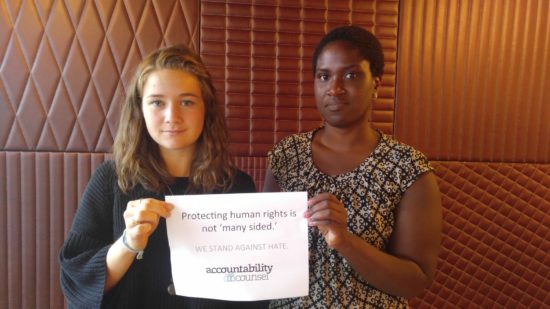 Today in the United States defenders of human rights have to state the obvious. It is not acceptable to remain silent when the president of the United States validates white supremacists. So we speak up against hatred, bigotry, racism, and anti-Semitism. We act against hatred in our daily work as we partner in solidarity with communities around the world fighting discrimination and abuse. We stand with our allies in the United States today who are working to speak truth to power and fight back against ignorance, intolerance and hatred.

There is a place for dialogue in this world. Dispute resolution – creating a space for equal voice and compromise – works in Accountability Counsel’s cases where there is good faith on all sides. But bigotry and racism are not signs of good faith. There is no place for compromise when one side brings a view that others are less deserving of human dignity. They are not tolerable starting points. There are not “many sides” to this issue. There is only one right place to stand — and that is for human dignity.

As members of a human rights organization, we know that while violence is sometimes the most urgent threat facing people of color and members of marginalized groups, the most persistent threats are policies that systematically exclude, target for discrimination, and dramatically undervalue human lives that are “different” from those in power. We stand against dehumanizing laws and practices as ardently as we stand against the bigotry of white supremacists.

As we move forward after Charlottesville, it is with knowledge that the United States has a legacy of slavery, colonization, civil rights violations, institutionalized racism, brutality, and intolerance of people of color. We work with this reality in mind as we defend the rights of all people to live with dignity and respect in a free society.