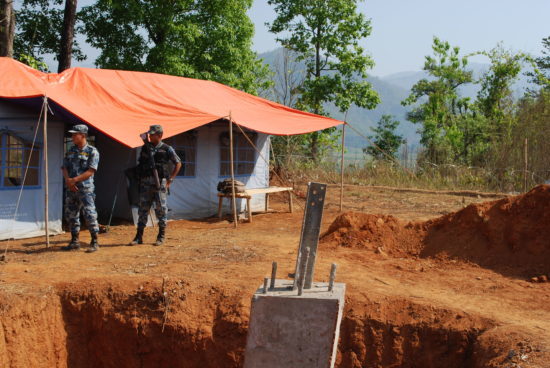 In a recent report, the World Bank has chosen to ignore community voices and cover up human rights abuses to push forward their projects in Nepal.

For nearly a decade now, local communities, including indigenous peoples, affected by the World Bank-funded Khimti-Dhalkebar Transmission Line (KDTL) have been protesting the KDTL project in Nepal’s Sindhuli district. While construction of the transmission line was suspended in Sindhuli for several years, in the past year, authorities have used violence against local people to resume construction by force. The government has deployed armed police to guard construction sites, which are located in villages close to homes and schools. In addition, the government has resorted to manufacturing consent for the project by arresting protesters and forcing them to sign consent forms under duress of imprisonment and threat of further criminal sanction. Although community members have repeatedly informed the bank about the government’s use of militarization, violence, and manufactured consent, bank management has ignored this information and presented a false account to the bank’s board of directors, comprised of its member governments.

The communities have requested that the bank support an independently-facilitated dialogue to discuss the project’s impacts, which will ensure a peaceful resolution to the project, and set a positive example for future projects in Nepal’s energy sector. Although the bank and the communities have been moving toward such a dialogue, the bank has failed to mention any of this in its report.

Last year, the World Bank’s independent accountability mechanism, the Inspection Panel, found that the bank – and the project implementing agency, the Nepal Electricity Authority (NEA) – failed to meaningfully consult affected communities in Sindhuli and address their concerns about the project. In response, the board encouraged bank management to amicably find a resolution to these issues. Unfortunately, more than a year later, management has failed to even publicly acknowledge the dispute and the underlying reasons for it. Instead, while reporting its progress to the board, management has chosen to deny the dispute, and cover up human rights abuses that are being committed to manufacture consent for the project. In doing so, the bank is not only exacerbating the conflict, it is condoning the use of force to push the project forward against its own rules and with impunity.

Affected community members have written a letter to bank management expressing concerns about three false statements in its report, which have the effect of:

In its report, management unequivocally states that “[i]n April 2016, the affected community in Sindhuli agreed with the Chief District Officer (CDO) that the [NEA] could resume the construction work for the disputed section of the [KDTL].” Based on the information management has received, this statement is indefensible.

Community leaders have repeatedly informed the bank that six community members did sign a form in April 2016, however, they signed this document while in police custody, after having being detained overnight, and under the threat of further criminal sanction. Some community leaders were not allowed to read the document and were later told it contained an undertaking that they would cease their opposition to the project. Despite repeated requests from the community and their advocates, local authorities in Sindhuli district – including the CDO and the Superintendent of Police – refused to disclose a copy of the document. This information was provided to the bank through multiple channels, including in emails to management, and in a letter and briefing paper sent to the President. One week after community members were coerced into signing their support for the project, community members held a protest at the CDO’s office to continue to voice their concern about project implementation. Bank management was shown the above image of these follow-up protests. However, management has actively chosen to ignore the communities, and instead appears to be representing that the document signed under duress constitutes consent for the project, and that the dispute between the communities and the NEA is over.

In addressing protests that occurred in July 2016, management states in its report that, “despite the [April 2016] agreement with the CDO, some local community members protested at the construction site against the project construction, for reasons that are unclear.” It is curious that the bank is claiming ignorance about the reasons for the protest since the communities’ concerns with the project are abundantly clear and have been repeatedly shared with management for almost a decade: the community is opposed to the manner of implementation of the KDTL project, and the lack of consultation and information sharing. This is why community members have been asking for a facilitated dialogue to address their concerns about project impacts – especially health impacts – and project implementation.

Management also neglected to address the detention and coercion of community members during the July 2016 protests. Community members and their advocates have repeatedly informed bank management that in July 2016, the police detained ten community members – who were peacefully protesting the project – overnight and only released them after they signed a document committing to cease their opposition to the project. Once again, community members assert that their signatures were provided under the threat of further imprisonment and criminal charges. They even filed a case on July 26, 2016 in the Sindhuli District Court, requesting the Court to invalidate the so-called agreement since it was obtained under duress.

The April and July incidents together point to a campaign of coercion and intimidation by the Nepalese authorities to suppress opposition to the Project. However, bank management continues to look the other way, allowing local project implementing authorities to act with violence and impunity.

Although the bank and the communities have been privately making progress toward an independently-facilitated dialogue, the bank has misrepresented this in its report. In private conversations, the bank has agreed that the facilitated dialogue should involve a discussion of the project’s impacts, including on health and safety, other community concerns, and potential solutions. However, in its report, the bank has narrowed the purpose of the dialogue to discussing the Vulnerable Community Development Plan and benefits sharing with community members.

Moreover, the bank has failed to mention its role and responsibility in the process. Privately, the bank refuses to fund the dialogue, citing fears that this will set a precedent for future conflicts. However, the Consensus Building Institute (CBI), a conflict management firm retained by the bank that met with the communities and the local authorities in Sindhuli, has provided the bank with a “recommendation to facilitate dialogue and assist negotiations” among the communities and the NEA “in project sites where conflict is known to exist, including in Sindhuli”. This was also not mentioned in its report, once again misrepresenting the nature of the conflict, and the bank’s role and responsibility in this conflict.

Bank management should not be permitted to make false statements publicly that cover up information it has been given privately. By doing so, the bank treats community voices as irrelevant in the development process. Correcting the public record and ensuring community voices are included in the bank’s report and in project implementation will go a long way to building good faith with local communities affected in this project and other bank-funded projects in Nepal.

Community members have sent a letter to the World Bank’s board requesting that the bank correct the public record, and ensure a fair dialogue process that has the potential to create a lasting and peaceful resolution to this long-standing conflict. The board must take these requests seriously. Otherwise, the bank’s member governments risk being seen as permitting development propelled through violence and duress, and with projects that trample over the rights of marginalized and poor communities. Achieving shared prosperity and inclusive economic growth will be elusive if these methods are left unchecked.