Why Do Complaints Take So Long? 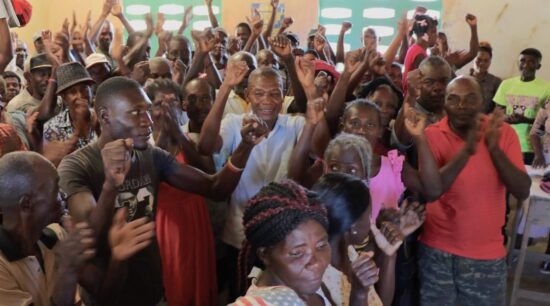 It takes an average of two years for a complaint to produce outputs. What takes so much time, and how long is too long?

On January 12, 2017, the Kolektif Peyizan Viktim Tè Chabè – a collective of Haitian farmers and their families representing nearly 4,000 people – filed a complaint to the Independent Consultation and Investigation Mechanism (MICI) of the Inter-American Development Bank (IDB) to demand accountability and remedy for the bank’s role in their displacement and the severe harm caused when they were forced off their land to make way for the large industrial facility in northeast Haiti.

Five long years have passed since the Kolektif filed their complaint. The case faced many unique obstacles, including the difficulty of land title transfer in Haiti, and the logistical complexities of the COVID-19 pandemic. But the protracted nature of complaints filed to IAMs is quite common across regions, mechanisms, and issues. A frequent concern about the way IAMs function is that complaints simply take too long to produce meaningful and timely results for communities facing harm. But the question of just how long complaints actually take is a surprisingly complex one.

How Long is the Average Complaint?

A frequent concern about the way IAMs function is that complaints simply take too long to produce meaningful and timely results for communities facing harm. But the question of just how long complaints actually take is a surprisingly complicated one.

To answer this question we must first define what we consider to be our start and end points. For the starting point, one could use either the date the complaint was filed, or the date the complaint was registered. These are rarely very far apart, but for our purposes we’ll use the filing date as the most accurate representation of when a complainant first engages formally with the IAM process. The end date is trickier; at first glance one might assume that the “closing date” of the complaint would be the natural choice, but this generally includes the time spent in monitoring stages, which ostensibly should overlap with the timeline of any actual implementation. Therefore, we can use the latest closing date of a substantive stage (a dispute resolution or a compliance review) as the most accurate reflection of the time between when a complainant raises an issue and when the complaint has at least begun to produce meaningful outputs. With this simple definition, the average length of all complaints that have completed a substantive stage (345 complaints total) is 678 days, or just under two years.

However, this includes a significant number of complaints that closed without outputs or with outputs outside the formal IAM process (94). Since these complaints did not produce the type of outputs within the remit of the IAM, and tend to be shorter than those that fully completed substantive stages, we can remove them from our sample.This increases the average length to 741 days, slightly more than two years. We can see the breakdown of average complaint lengths by mechanism as follows: 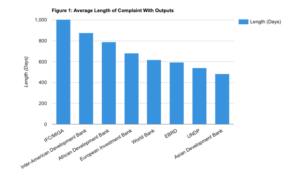 There is significant variation across mechanisms, but also within the mechanisms themselves. 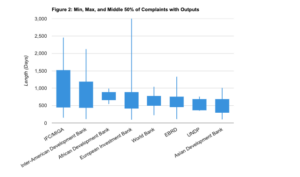 In addition to the idiosyncrasies of particular complaints, there are many reasons for these variations. Difference in policies can lead to widely different processes for finding complaints eligible, and for managing the complaint through more substantive stages. In addition, accepted practice can lead to different levels of engagement and responsiveness. To better understand these differentiations, we can look at the length of particular stages at each mechanism.

On average, a complaint takes about 4 months (121 days) to be found eligible. IAMs have substantively different eligibility criteria and policies for eligibility determinations. As such, the average time a complaint takes to be found eligible ranges from just 35 days at the IFC’s Compliance Advisor/Ombudsman, to over 209 days at the European Bank for Reconstruction & Development (counting complaints from all three iterations of the EBRD’s compliance mechanism, currently the Independent Project Accountability Mechanism). Interestingly, the length of eligibility determinations seems to have little correlation with overall complaint length, except for the fact that the mechanisms with the longest eligibility periods have some of the shortest substantive stages. 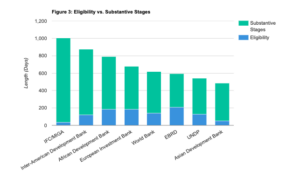 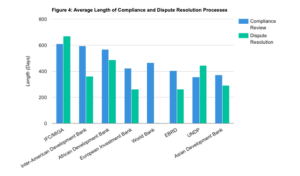 Are Complaints Too Long?

On one hand, when communities are facing significant harm, waiting two years to even begin the process of remedy is clearly too long. On the other hand, pressure to move faster may result in cutting corners, reducing stakeholder engagement, and pushing through a “solution” that does not match community expectations. The ideal outcome balances these competing priorities, maximizing efficiency and engagement without sacrificing quality and minimizing the burdens of sustained community engagement. The data bears this out. For complaints that underwent a substantive stage, the likelihood of producing outputs increases dramatically as the process gets longer, but quickly diminishes when reaching the 600-day mark. Even more telling, complaints with substantive stages that extend beyond four years become progressively less likely to produce outputs. 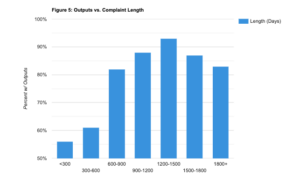 “Outputs,” however, are a flawed proxy for meaningful remedy. They are necessary but not sufficient, and more information is needed to better understand the correlation between complaint lengths and meaningful remedy. Accountability Counsel’s Research team is exploring this question of identifying and categorizing complaint outcomes, and we hope to share preliminary findings in this newsletter soon.