In celebration of World Environment Day, Accountability Counsel spoke to Gabino Vicente, a Chinanteco Indigenous community leader in Oaxaca, Mexico who took action to ensure protection of a freshwater creek that was threatened by the internationally-financed Cerro de Oro hydroelectric project. With Accountability Counsel’s support, Gabino led four Indigenous communities in Oaxaca to successfully negotiate an end to the hydroelectric project, which would have poisoned their drinking water and destroyed a vital income and cultural resource. Critically, women community members played a powerful role in the negotiation process. Here is the story of Gabino Vicente defending his community and the environment, in his own words.

Do you mind sharing a little bit about yourself and your background?

My name is Gabino Vicente. I am originally from the community of Santa Ursula, from the municipality of Tuxtepec in the state of Oaxaca, Mexico. I am of Chinanteco origin, and I speak Chinanteco. From 2003 to 2011, my community fought hard to defend our Arroyo Sal freshwater creek. I consider myself a leader of the community. 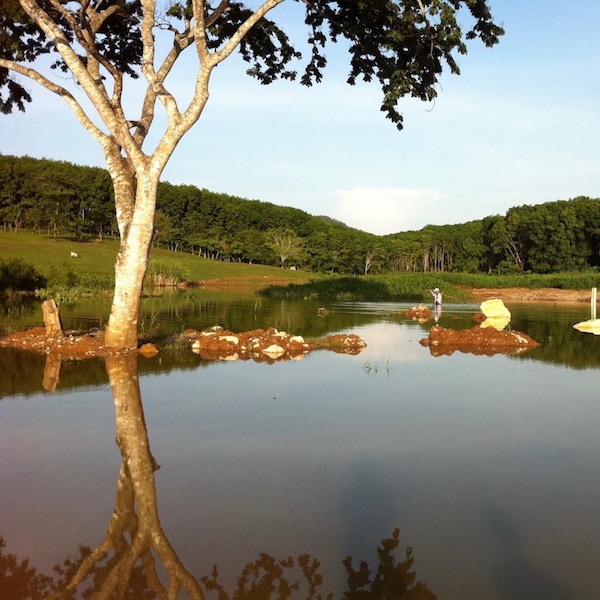 84-year old man in Los Reyes, Oaxaca, Mexico wading the Arroyo Sal to access his land
after the company destroyed the land bridge

What happened in Oaxaca, Mexico regarding the Cerro de Oro hydroelectric facility that was financed by the U.S. Overseas Private Investment Corporation (OPIC)?

In the last months of 2009, we learned from media reports that a hydroelectric facility was going to be built in our community. They called it a “mini hydroelectric plant,” and from this moment, they were already trying to influence public perception by minimizing the impact that this project would have. We did not realize then nor did we understand what the project was about. For us, the project meant investment, hence the majority of people in the community agreed to the project, but without really understanding the actual impact it would have.

The company hired intermediaries who are people who lived right here in Tuxtepec to create a link with the ejidatarios, a body of authority that originates from the communities and makes decisions about land use and customs. In Santa Ursula, there are 88 ejidatarios, and the company only approached them to start establishing procedures to carry out the hydroelectric project. However, the company did not disclose information about the project, and they did not inform the rest of the community in Santa Ursula. We have approximately 1,200 community members where we live, the rest of us did not receive any information about the project from the company. The ones who informed us about the project were the ejidatarios themselves.

Around August 2010, we found out that the company began to cut down trees that were located on the margins of the Arroyo Sal. This creek is the primary source of clean water in our area. Two communities depend on this creek for drinking water: the community of Los Reyes, and the community of Santa Ursula. When they began to cut down the trees and bring in machinery to dredge the creek, we realized the magnitude of the project: an ecocide of the Arroyo Sal. The project would convert the creek into a vent channel, cutting off the communities’ access to the Arroyo Sal creek. This would destroy all the life that lived here.

How did this impact you on a personal level?

Well, if we were not ejidatarios, we did not participate in these assemblies or discussions with the company. The ejidatarios participating in these assemblies did not necessarily take into account the opinions of the rest of the people in the community. My first feeling was helplessness. I felt helpless when I saw the destruction of the creek when it first began. Before the creek, we had a very beautiful river in our community. To date, this river is no longer what it used to be [due to the construction of the Cerro de Oro Dam in the 1980s]. The river water is no longer useful, it is dirty water. After 30 years of witnessing the destruction of our river, I could not bear to see our creek destroyed. In that moment, I just felt helpless of not being able to do anything.

How did you first come to know Accountability Counsel?

We got to know about Accountability Counsel (AC) through someone who was working on a related issue of displacement from the Cerro de Oro dam. AC, specifically Natalie and Komala in this case, were the first people who came to support the community. It was circumstantial that we came to work together. It was when we realized that the company had started the destruction of the creek, we contacted Natalie, and she agreed to support us in this case. We filed a complaint about the hydroelectric project [to OPIC’s accountability office] and asked for a dialogue with OPIC. We wanted information about the project because we had none. With AC’s support, four communities including Cerro de Oro, Los Reyes, Paso Canoa, and Santa Ursula were able to collectively make these demands to OPIC.

AC’s role in this case is decisive because, without AC’s support, we would not have known the real impact that the hydroelectric project would have on our community and the environment, and I don’t think that the dialogue with OPIC would have been possible. For eight months, we negotiated and worked with the project investors, and the state and federal officials of the country. Accountability Counsel had credibility and their support strengthened the communities’ position, and thus also forced government officials to take the issue seriously. 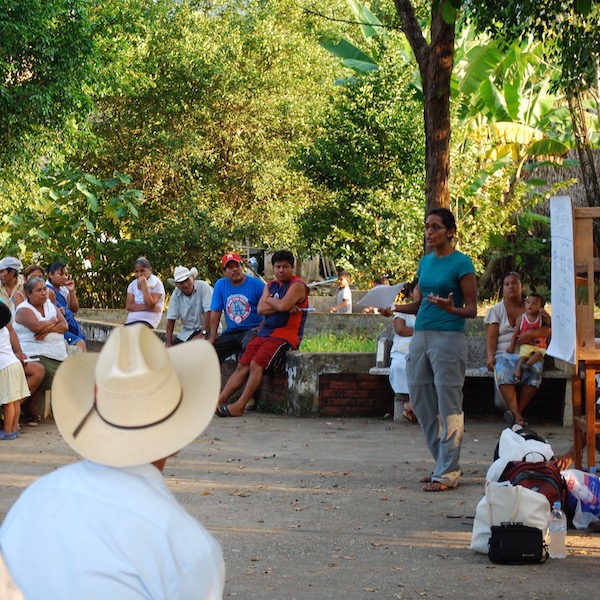 Komala Ramachandra conducts a training on OPIC’s Office of Accountability

What happened when your community had a seat at the negotiation table?

It was crucial. We had a community-wide assembly in Santa Ursula for the first time thanks to AC. We also carried out community assemblies in the other three communities. The project representatives attended each of these assemblies, and they could talk directly with the affected people. All of the communities began to hold large meetings, where people learned about the project’s magnitude. Subsequently, each community established a commission, and we coordinated and organized with AC’s help. It was then that we initiated the dialogue with OPIC.

Our women community leaders also played an important role, as they were part of the commissions. For example, in Santa Ursula, two out of six commission members were women; In Paso Canoa, there were three women out of six in the commission. I believe that women have more credibility in our area, as men are perceived to be more susceptible to corruption, and thus there is more distrust towards men.

Eventually, the company representatives ended up in Tuxtepec, where we learned what the company’s arguments for the hydroelectric project were, and we also presented our communities’ concerns. Throughout this process, the company hired an expert from the Government of Mexico to participate in this dialogue. At the end of the dialogue, the expert ended up agreeing with the communities’ position. It gave us confidence that we were indeed right; the arguments and reasonings we gave were valid. It led us to a successful negotiation to stop the project and prevent the destruction of Arroyo Sal creek. AC’s participation was very important, specifically because of the credibility and trust that AC generated amongst the communities. Companies usually come to the communities to divide us, and this generates mistrust. I believe that AC achieved what we could not have done by ourselves before, and that was generating trust between all parties.

“At the end of the dialogue, the expert ended up agreeing with the communities’ position. It gave us confidence that we were indeed right; the arguments and reasonings we gave were valid. It led us to a successful negotiation to stop the project and prevent the destruction of Arroyo Sal creek.” Gabino Vicente, Chinanteco Community Leader

In your opinion, what caused the Cerro de Oro hydroelectric project to fail? Was there any way this could have been avoided?

The main problem was the lack of information, and the lack of sincerity on the part of the company to approach communities directly and report what the risks or impacts of the project would be, and how they could be mitigated. Ideally, full information about the project should have been given. Second, there should have been public consultation – based on full project information – with all affected communities to hear our concerns and seek our approval. In our case, none of this applied to us. We were neither consulted nor given full and accurate information about the project. That was the biggest mistake.

If the company had complied with the protocol of giving information and approached the whole community about the project beforehand, without a doubt, we would have stated that the project was not feasible, as it would destroy the communities’ key natural resource, the Arroyo Sal creek. The company could then have looked for an alternative so as to not affect the area of the creek. I have no doubt that if the company had informed and consulted communities beforehand, they would not have decided on the project as it was. 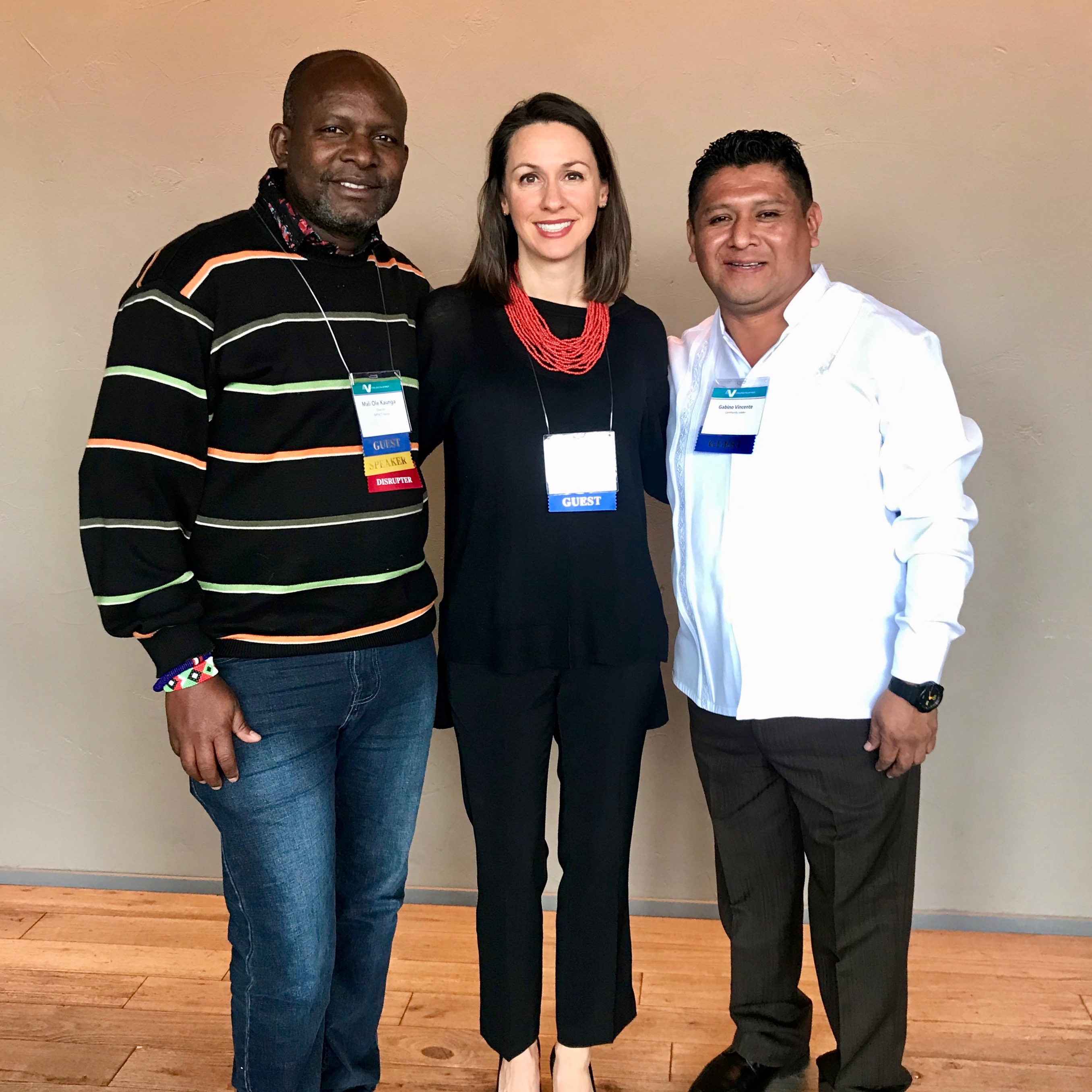 Earlier this year, you were in New York speaking on a panel at the annual Confluence Philanthropy Practitioners Gathering about the need for impact investors to consider unintended harm from their investments. What did speaking on that panel mean to you?

The most important thing was sharing my experience with the Confluence event participants, especially because many of them were investors. It is important that investors know how to prevent what happened in Oaxaca from happening in the future, and that they consider the opinion of local communities before starting a project so that the project is agreed upon by and brings benefits for both the communities and the investor. This way, investors can avoid capital loss and harm to nature and the environment, as well as to communities themselves.

I just want to thank Accountability Counsel because without your support, we would not have Arroyo Sal today; the biodiversity surrounding the creek, including the turtle species that inhabit this area, would not have survived. We are not a community that opposes development or progress, but the Cerro de Oro hydroelectric project was going to be at the expense of communities and our environment. It was going to destroy our natural resources without any benefit to the communities.

I believe that the lesson learned here is that communities require investment, but these investments and developments need to be carried out in a sustainable manner. We should not put the environment or our natural resources at risk. We need more people in the world to contribute to the preservation of our natural environment.

The conversation was conducted in Spanish, and has been edited for length and clarity. Translation by Carlos Flores, Accountability Counsel. (Traducido en español aquí)