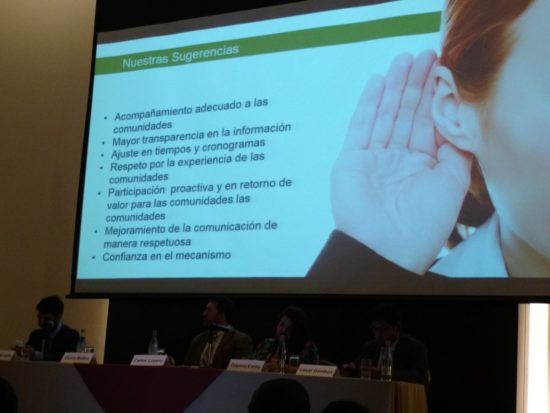 This month, we have experienced the immense satisfaction of seeing Gloria Molina, one of our community partners, present her experiences and “lessons learned” to three major international accountability mechanisms, as well as a diverse civil society audience, at a workshop in Bogotá, Colombia. Gloria is the spokesperson for Comunidades Unidas, a community-based organization representing the Fontibón locality in a complaint to the independent accountability mechanism of the Inter-American Development Bank (IDB).

Gloria and Comunidades Unidas plan to share their expertise with other communities on an ongoing basis and to support those communities to use these mechanisms in defense of their environmental rights, health and well-being. We are thrilled to support these efforts and to see our work amplified through “training the trainers.”

Here is Comunidades Unidas’ report from the workshop (translated from Spanish):

In December 2016, Gloria Molina, spokesperson for Comunidades Unidas, presented the perspective of communities affected by the operation of the second runway of El Dorado International Airport on the role of international accountability mechanisms. Gloria Molina spoke in particular about the role of the Independent Consultation and Investigation Mechanism (MICI) of the Inter-American Development Bank and about the need to prepare communities to use these mechanisms.

In her presentation about the initial dispute resolution stages of the complaint process, Gloria Molina emphasized the difficulties of the development of a dialogue process between communities affected by the operation of El Dorado International Airport, airport authorities, and the airport concessionaire, facilitated by MICI. She commented about the hardship generated by MICI’s unilateral suspension of that process, in which the parties had achieved an agreement and communities expected the mechanism to monitor it for compliance. The agreement did not enter into operation, after the suspension of the dialogue process.

Similarly, she commented about the difficulties in activating the investigation phase of the complaint process, due to changes in MICI’s operational policy and multiple extensions of its deadlines. She referenced the difficulty in obtaining information and stressed the need to work to strengthen the transparency of the process and to build trust with communities in the course of the mechanism’s work.

At the same time, Gloria Molina emphasized the importance of communities being aware of these mechanisms and learning about their processes, to ensure that the mechanism’s intervention can be a tool in favor of the defense of the rights of communities when large-scale projects financed by international institutions injure their environment, health and well-being. She is committed to help build community networks to strength knowledge and collaboration in accessing these mechanisms on behalf of communities.

For more information about our work with Comunidades Unidas, see here.